New web site up and running !! New photos of harps under construction too ! 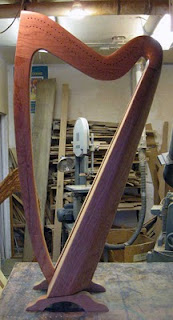 OK, got my Totally new web sites up and running, a couple days ago, both www.laserharps.com, and wwwmountainglenharps.com

And here are a couple of shots of two harps on my workbench that are almost finished!

One is a 34 string Cherry wood harp that will be nylon strung, with Camac levers.


The other is a Carved Cherry wood 33 string nylon strung acoustic-electric-midi harp, that is also set up with 6 green lasers. This is a first of a kind hybrid string/laser harp that anyone has built. It has the capacity for each string to send out a midi signal coded to the string`s pitch, that can allow the harp to play any sounds to go with the strings, in harmony with those notes generated by the strings. There is a set of 7 triple slide switches , that act as 'midi pedals' to sharp or flat all the midi signals for all the C`s, D`s, ect, so that the midi signals are the same pitch as the strings are when their levers are flipped up.


The lasers will allow the triggering of any back ground musical or natural sounds, and /or projected video and still images, to go with the music being played. This harp is a custom creation for a Harpists who plays Nature oriented Celtic music. So for example she might be playing Celtic music while she is triggering back ground sounds of ocean waves, while one-to-three LCD projectors are showing video of a seas shore scene.

The multimedia controller that goes with the Lasers actually has 12 channels available , with 6 being used by lasers, and the other 6 being used in this harp by a multi-channel midi pedal. the Harpist will be able to use this pedal to capture and trigger loops of music she has just played, to accompany herself. The triggering can be via one of the lasers beams, that can have up to 60 sequences of sound or images programed on it. The Lasers will also react to their light being broken, to trigger sound or video, up to 70 times per second.

When this harp is finished, I will be posting videos of it being played, with haze to illuminate the lasers. There are two green Lasers that shoot up the soundboard, to sensors hidden under the carved leaves that you see in the picture. Those beams will reflect off the lacquer of the soundboard to give the harp soundboard a green glow, to go along with the gold of the Spruce soundboard. The harp has cared cherry wood leaves all over the carving, which when finished will have touches of mother-of-pearl based green paint to highlight their veins and edges. So the finished harp will be Rich Red Cherry wood with iridescent green highlights in places, with a gold Spruce sound board and with a green halo to the whole instrument, when the lasers are lit!! :-)
Posted by Glenn J. Hill at 9:23 AM